Venue: Home (Every day of the bastard week)

Let’s keep this thing ticking over, shall we?! I asked a few weeks back now if I should do a write up on anything and what could be useful for others to use. As a Mr. Charlie Marriott was the first (and pretty much only) respondent early on, let’s get started with his idea. So, how do I decide where to go; what areas and the like do I usually prioritise and which sites do I regularly use to get the fixtures in my mind in the first place…. 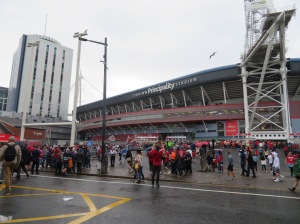 To the Millennium Stadium (ignore the other name there!) 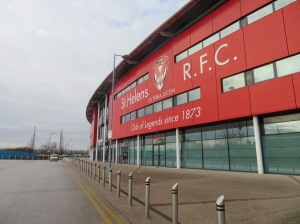 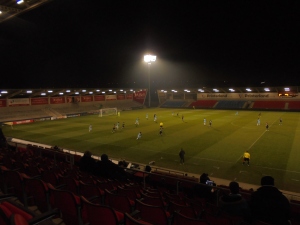 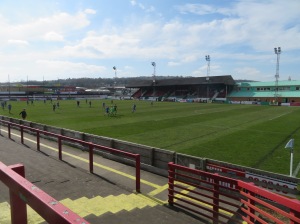 Well, let’s start off with deciding. This largely comes down to two main areas – the town/city and it’s level of interest or the ground itself. Very rarely do I give much in the way of sway to the actual fixture at hand. This, mainly, is because I don’t really care too much about the game itself, apart from the odd end of season trophy lifting celebration. You see, I’m more about the day – the sights and sounds of somewhere I’d probably never visit outside of this strange hobby – and the ground itself, on certain occasions. The pub options also play a part, though again it’s not anything that largely counts towards the choice. On the whole, I go for interesting/cultural places – Lichfield being one as it has its cathedral and city status – meaning it always held pulling power for me, despite the ground not being all that inspiring. Banbury, on the other hand, had the ideal mix of interesting town and super little ground. It was just a shame it was absolutely freezing! Then, you have the strange ones – the likes of Man City u23’s at the AJ Bell, Liverpool’s at St. Helen’s and Manchester Utd vs AC Milan at the Millennium Stadium. Because why not. Then you have the ground-share highlights like Keighley Cougars (Steeton AFC) and the likes of Newcastle Blue Star at Kingston Park in their former guise. Or a random Manchester League game in Salford Quays…. 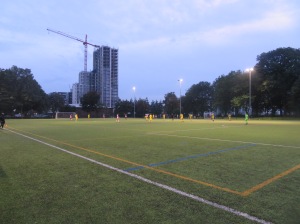 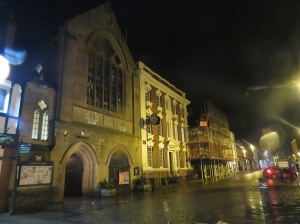 Lichfield – more interesting than its ground 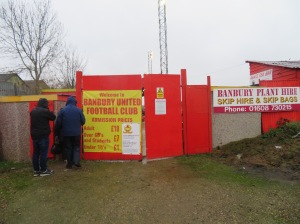 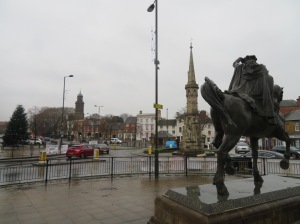 Another that does aid me in decision making is the ground in question’s future. Is it likely to be replaced/is the club in danger/are renovations or a full knockdown in the offing? If any of these seem likely, they go up somewhere close to the top of the list. The start of the season a couple of years back point to this, as I used my last few weeks of railcard access (up to 25 at that point) to get down to Portsmouth, Plymouth and Exeter within the span of 5 weeks. I’m still not sure my back has fully recovered. Tying into that is the quest for the ’92’. I generally have a preference to tick off the more distant grounds that are fairly easy to do – always with the added challenge of each trip being completed in a day. As a result, all the south coast clubs in the club (bar AFC Bournemouth) have been done, whilst the likes of Cardiff, Cambridge, and numerous London/SE-based teams (i.e. Millwall, Reading, Gillingham, Southend) have been added to the list – though this bloody virus lark did cost me a Forest Green ‘tick’. I don’t particularly want to do Forest Green, but they had to be done. I’d take it now, though….

Many of the higher clubs I tend to ‘tick’ in the FA Cup, with tickets and the like being on the cheaper side, which is always helpful. Tied into that, I always try to keep a day at as close to a £100 ceiling as possible and far lower ideally. Of course, the further you go, the more likely it is to happen and just make sure not to miss your stop and awake in a random Cumbrian outlying place and nearly completely f*ck up the journey home via the medium of “disruptive passengers”. I’ve never been so happy to see a train to Manchester arriving, I can tell you as much! It also helps to gain a purchase history with a club in the upper echelons that tend to have a smaller away following; you can easily infiltrate their ranks to get a ground or three in. Huddersfield and West Brom have aided me muchly in this quest over the previous couple of seasons, with Crystal Palace, Southampton, Brighton and Arsenal all getting crossed off this way. I have a thing for blue-and-white pin stripes, obviously! Someone did nick my free Huddersfield shirt at Southampton last year though, and I’m still not over it!!! 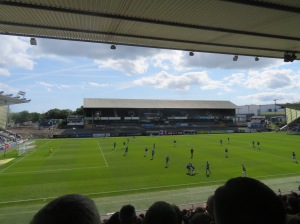 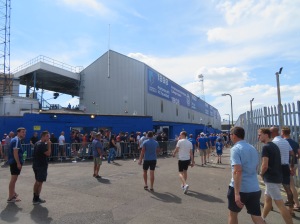 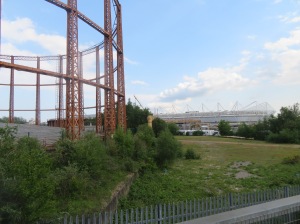 Back onto grounds and how I order them in how pressing they are to visit. Well, I wanted to get to Plymouth whilst the old grandstand still stood. Yes, it was out of use, but its traditional grandeur was worth it. The Boleyn Ground was secured in the FA Cup during its final year, whilst White Hart Lane was also squeezed in late in the day. Griffin Park and Bootham Crescent joined the list shortly after and others that look to be approaching a change in look get pushed right up top; the Abbey Stadium, Selhurst Park, Sincil Bank amongst others fit that bill – with a number still awaiting my visit (If anyone can aid in these tasks, please don’t be shy!). Other grounds are done whilst I might as well – the second of WHU’s homes, the Olympic Stadium, being ticked for a tenner, just because it wasn’t particularly one I wanted to spend a mint on. 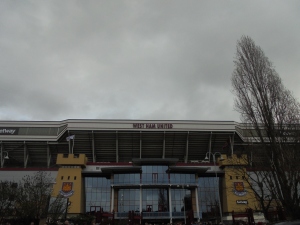 Back at the Lane 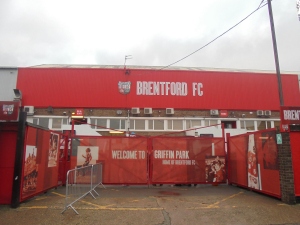 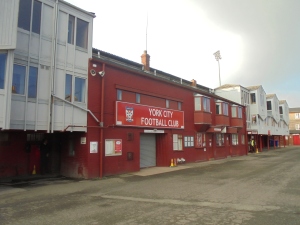 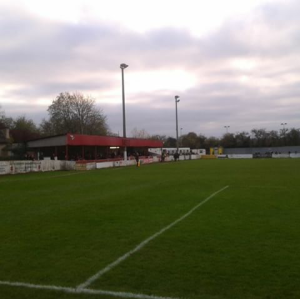 Even the old Stamford ground made it!

Foreign grounds aren’t and haven’t been a big player on these pages yet, largely because I want to see more of the UK first. For now, Scotland and Wales provide the majority of my ‘foreign’ visits, though a couple of small Spanish clubs have been paid a visit during holidays. It’s always different to see how the set up changes and what is similar. The same ticklist sets out places in these countries too, with Edinburgh City, at the deceased Meadowbank, being my first game north of the border, whilst the likes of Gretna followed, though was something of a damp squib, being neither overly interesting or full of drinking holes. Murrayfield, Celtic Park, Palmerston Park (Queen of the South) and Pollok (my first Junior ground) have all followed – though QoS did lead to my Cumbrian mishap! Welsh wise, there haven’t been too many bad trips – though Glan Conwy didn’t end too well for one reason or another. Eagle Sports can tell you more about that….

Sites wise, I usually just traipse through leagues – my phone home page is a collection of Full Time (the FA site) links to all and sundry locally and the usual conference/national league on there too. That’s basically it. For friendlies, I’ll usually go around the lower grounds and towns I fancy getting to, with the weather, normally, more likely to play ball than during the mid-season, of course. All the ’92’ must be first team, real season games, although I do count my visit to Anfield for Brasil vs Croatia alongside an Asterix. Walsall has since been fixed, during their pulsating cup tie with Darlington, whilst Millmoor was added, alongside vikinghopper Anders, in some fairly “rustic” conditions…. 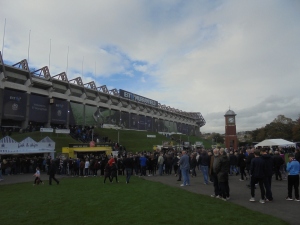 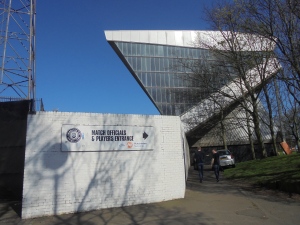 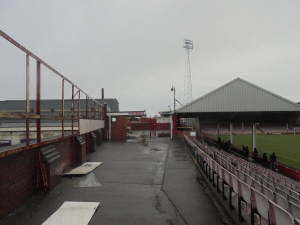 So that’s pretty much that. If this has been of some use – great! If not…well, there’s no surprise there! Keep an eye on stadium news regularly, I know Helsby, Bath (less likely now) and a few Football League clubs are looking at/in the process of gaining a new ground in the near future (Cambridge, Ipswich and Wimbledon come to mind), many more will probably spring up in the near future too. Let’s hope we all get back to a sense of normality soon too as, I don’t know about you, I think I’m about to go spare – kind of hence why this is appearing on these pages. A few more weeks. A few more days. Slowly, slowly, we’re getting there. Happy hopping…..