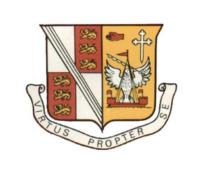 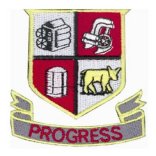 With heavy rain in the preceding days putting pay to the majority of fixture lists in the English lower leagues I, along with many others I presume, was left to pick through the pieces that remained from the destruction. Of course, being in England (especially Manchester), you always have a safety net lined up and this week’s one was the Oldham Academy North’s 3G pitch which plays host to Royton Town FC of the Manchester League’s Premier Division.

As more and more games fell foul of the wetness throughout the morning, I decided I would play it safe and head up to Oldham and tick-off a “ground” that falls just the right side of my rules. The reason? It has a taped off area for spectators. That’s it, just a little bit of bright yellow tape. Now to be honest, I’ve mulled over this one for a while and whether it really warranted a blog but, as there was that designated area, which was still on the artificial grass even, I figured it just about made the cut. So, what of the day?

Well, it wasn’t an inspiring one. It began with a smelly bus ride into Manchester, before escaping the weather once more and travelling up on a “classic” graffiti-decorated First service up towards Boundary Park. Once within sight of the ground, I quickly debussed and made a hasty track for the Brewers Fayre pub which sits a couple of minutes away from the League One Latics’ home.

I quickly realised that Oldham must be at home due to the traffic in the streets around the ground, so was a little more optimistic that the pub would have an atmosphere that, I figured, my game would lack. I did, however, make a bad mistake by deciding on a “short-cut”, which turned out to only make things worse as I was soon squelching over the corner of the neighbouring playing fields and clambering up a small, soft mud banking to get there! 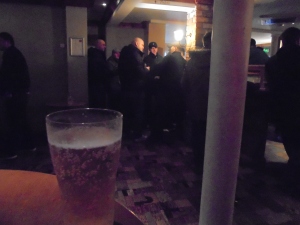 I survived this climb of Everest proportions and took perceived refuge in the Clayton Green. Once inside, I quickly got to the bar and was soon in possession of a pint of Beck’s for £3.45. I took my plastic pot and thought I ought to have a check about who was in town, having already overheard the accents and reckoning they were from somewhere in London as, you know, I’m obviously some sort of genius. So, who was in town?

Millwall. “I was expecting chairs and tables to be thrown!” came a quote from somewhere inside after the fans had exited and headed off to Boundary Park. There was nothing of the sort from this group, though, with no signs of any trouble flaring which was good. Alas, there was little atmosphere either, with the rain probably dampening that too as well as the Oldham area, as I braved the elements once more and headed up for my game. Interestingly, I was the only one in the Clayton Green who headed this way…. 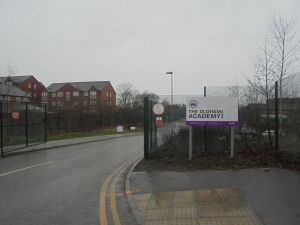 Arriving at the Oldham Academy North 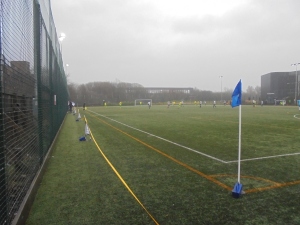 A five-minute walk saw me arrive at the gates to the Academy and I was soon gaining access through the main entrance to the Sports Centre. After heading out through the rear doors to the pitch area, the players from Walshaw followed soon after to join their Royton counterparts on the pitch and we were all set. So, about the ground. There’s a pitch. There’s the aforementioned tape. There’s a mill which towers over the venue gaining it some character, but otherwise there’s little to get the pulse racing. Nothing to do with the club, just the venue in pretty uninspiring and unfortunately, the action on the pitch didn’t do anything to warm the cockles either. Anyway, before I get too down on things, here’s a bit about Royton Town’s story…

Royton Town Football Club began life as the Stotts Benham works side in the Rochdale Alliance League, before changing its name to Royton Town. The club won the “Rochdale Alliance Premier League treble” and went unbeaten for two-and-a-half seasons before moving up to the Lancashire Amateur League in 1994. The club spent seven years here before transferring into the Manchester League in 2001.

The club have competed in the top-tier of the league since they joined, bar the first season where they won the First Division. After just two seasons, Royton won the Premier Division before drifting into a lower-mid table outfit for the next few years. Their best season since was last time out as the club recorded a runners-up placing in the Premier Division and they currently sit in third-place this season. 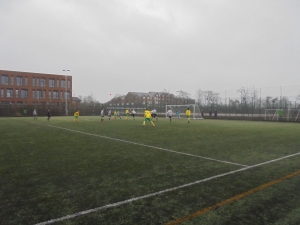 The game got underway and, before long, the rain came in and made for an unpleasant experience for those watching, playing, coaching and officiating en masse. It definitely didn’t help the gameplay, as both sets of players, understandably, found things hard going. For the first half-hour, I think it would be fair to say that very, very little happened bar a couple of half-chances for the visitors, crafted chiefly by their quicksilver #11.

It was, though, unsurprising that Walshaw went in at the break ahead. A low ball into the box was turned in at the back-post by an unfortunate defender for an own-goal and that was pretty much that. Everyone without an umbrella was wet, cold and, those connected with Walshaw excepted, miserable. Half-Time: 0-1 and it was off to the indoor tea-bar within the main building for some warmth and a dry off. 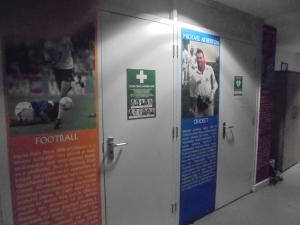 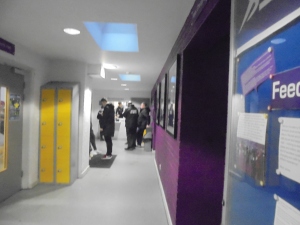 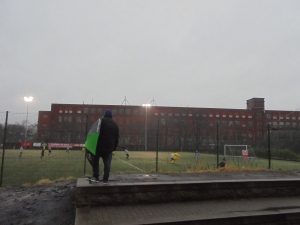 After purchasing a cup of tea for the princely sum of 50p from Toany’s, it was soon time to head back outside. Begrudgingly. I did think about watching the second half from the slightly raised, paved area on the academy side of the pitch, but the cage made that impossible. So, back to the tape it was, though a watching, very damp dog was keeping a bit of cheer going on a very dour day.

On the pitch, Walshaw came out of the blocks quickly and took the game, once more, to their higher-placed hosts. Indeed, they looked to have doubled their advantage not too long after the restart, but the officials judged the ball to have not crossed the line, following a crisp drive smashing down off the crossbar. This was followed by Sports’ Jonathan Hunter somehow managing to strike the post when one-on-one and you wondered whether the visitors would regret these misses when the hosts got it together somewhat.

As it was, Royton never got it together and looked nothing like a third-placed team. Indeed, it looked like a complete role-reversal with Walshaw dominating the ninety minutes, their hipster beard bearing ‘keeper only being forced into one save of note when he palmed away a decent drive. Eventually, though, Walshaw got their deserved second when Hunter atoned for his earlier slip-up to net at the second attempt after his initial drive had been kept out. Boundary Park was also audibly going mad on the occasions of Connor Ripley’s double penalty save exploits. 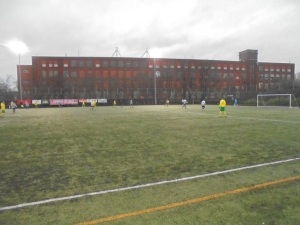 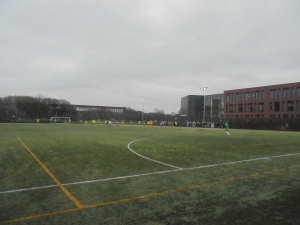 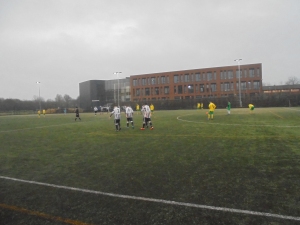 This goal didn’t mean Walshaw were going to retreat into their shell, though, as they continued to come at the out-of-sorts Royton the centre-back going close with a header before they netted a third late on, a close range finish by Connor Gately into the largely unguarded net serving the coup de grace to the hosts. A good day for Connors in Oldham! Full-Time: 0-3 and a convincing win in a strange contest. Royton are obviously a good side (being 3rd in the table) but they just didn’t turn up on the day and were convincingly outplayed by their mid-table opponents.

After the game and feeling as though I’d taken a dip in the nearby River Irk I was that wet-through, I was delighted to find the bus back heading to the stop just as I arrived. Soon on board, it was back past Boundary Park where a few content Latics fans joined and back down to Manchester very uneventfully. That was that. A very uncomfortable day overall, but at least the game improved markedly so credit to the teams, especially Walshaw, for that. With yet more rain forecast for the following weekend, it looks like we could be doing it all again. Oh, the joys of this ‘hopping lark… 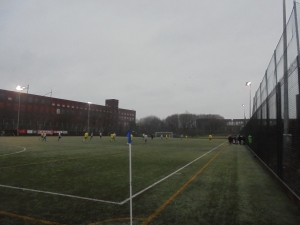 Food: N/A (Chocolate and the like was available I think)

This site uses Akismet to reduce spam. Learn how your comment data is processed.