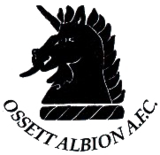 Game off. Match postponed. No game today, Just a few of the phrases that continued to come up on my twitter feed as the hours of Saturday morning ticked by. First, my intended game of Silsden vs West Didsbury & Chorlton fell by the wayside, followed up by my backups at Irlam and Northwich Manchester Villa. So, a short look down the road from my abode saw my gaze settle upon Shawe View and Trafford FC and a revisit to my old regular stomping ground.

But first, a traverse through Urmston was to happen. After arranging with Paul of pitchsidepints a meeting place of the Steamhouse pub on the Liverpool-bound platform at the town’s station, I arrived in there for just before 12.30. After ordering a pint of Weinhenstephan (the oldest brewery in the world, don’cha know), Paul arrived along with his mate Dan and before long, the usual (on these pages anyway) Dan arrived. So, with our clique complete, we headed out of the station pub and up the steps back to street level and headed down the road to our next stop, The Britannia, after Dan had asked where the pool tables were at. Acting as tour guide, this was my recommendation.

The Britannia is nothing special in terms of anything really and is rather bland and lacks atmosphere. So, without a pool request, I wouldn’t have recommended it, unlike the Steamhouse which is full of character, due to it being a former station house and still set out in many ways as it was. So, with a defeat and a joint win, I declared my retirement from pool after the latter victory and we headed back out and onwards to Urmston’s Wetherspoon’s, The Tim Bobbin. The Bobbin is in an old electrics showroom, though the building resembles more of an old picture house as Dan enquired to whether it was. I’m unsure if it ever was, as it is before my time, but I’ve always had a similar idea from viewing it.

Either way, in here we all purchased our beers (2x Desperados in my case), before we were met by my mate and Trafford fan, Mike, better known as Cappy. I’d not seen Cappy since before I can remember, so it was nice to have a catch up prior to the game. It came about that Trafford were supporting Key 103’s Mission Christmas scheme and Cappy had bought one of those awful orangey-white balls that are used in the Prem for them to utilise. Sadly, I was unaware of this fact due to Trafford still being the only club to block me on the social media side of things largely due to…no, no I’m not going there again! 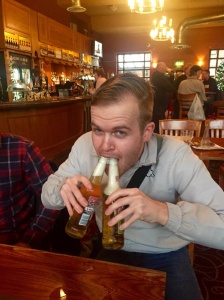 Enjoying the frothy liquid in ‘Spoons 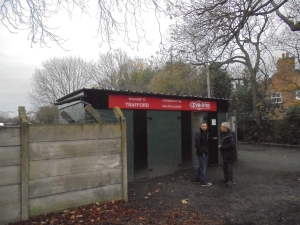 With drinks (mine especially frothy) finished, our five strong group headed off down the road and out of the town centre towards Shawe View, which is actually located within Flixton. A shortcut through Chassen Park sees you exit at the mouth of Shawe Road and from here, you head past the neighbouring pitch and down a narrow access road that runs parallel to  the ground before you reach the turnstiles. Here, £8 was handed over for entry after Paul and Dan had utilised their very best ways and after a further £3 was handed over for a golden goal and programme together, I was officially into Shawe View itself.

The ground is only quite small, with the main stand sitting upon the half-way line. This is all seater and neighbours the “clubhouse” (a mobile), the food hut and the tunnel leads to the dressing room areas that sit to the rear. Beyond the clubhouse and next to the turnstiles its a small open terrace, which affords a slightly higher view of the pitch. Behind the far goal is a covered standing area and the far touchline houses a dual seater/standing area, with a couple of rows of seating in front of a row of standing space. Behind the near end goal is open standing, with the ground’s grass mounds rendered obsolete due to the FA’s (and the country’s) OTT Health & Safety rules. Booooo!

So, with not long to kick-off, Paul and Dan headed to get further beer from the clubhouse and usual Dan and I stayed outside. Prior to kick-off a minute’s silence was observed for a supporter who’d passed away during the week. Then it was on to what should have been a game of football, but for large parts resembled a struggle against a windtunnel as “Storm Desmond” added it’s influence upon proceedings. Before we embark upon the game itself, here is the history of the club still known as the North, Trafford:

Trafford FC was formed in 1990 under the name of North Trafford (hence the still standing nickname). After originally being denied entry to the Mid-Cheshire League, a drop-out presented them with a place. After finishing runners-up in their inaugural season, the club were promoted to Division 1. After finishing fourth the next year, Trafford made the step up to the North West Counties Division 2. In 1994, they finished in second here and were promoted again, this time to Division 1 of the NWCFL. Upon this achievement, the club adopted their current title.

1997 saw Trafford win the NWCFL Division 1 and with it promotion to the Northern Premier League. In 2000, they won their first silverware at that level, the NPL President’s Cup, before being relegated three years later. After 5 years back in the NWCFL, the club were promoted again in 2008 and took a place in the NPL Division 1 North. Their first season back at that level saw further success, as Trafford lifted the NPL President’s Cup in the 2008-’09 season with a 2-0 over Quorn at the opposing side’s home ground, the host ground decided on a coin toss! Manager Ged Kielty then left the club citing personal reasons, before being replaced by “club legend” Garry Vaughan.

Under Vaughan’s tutelage, Trafford gained a foothold in the Division 1, before surprising many by managing to reach the play-offs of the Northern section. After defeating New Mills in the semi final, they travelled to Cammell Laird for the final where they beat the hosts on penalties to secure a place in the NPL Premier Division for the first time ever. Despite a good first season, finishing 12th, the results began to slide away and Vaughan was dismissed, replaced by Graham Heathcote. Heathcote, however, couldn’t turn things around and the club kept sliding down the slippery slope to relegation, before Heathcote stepped down at the season’s end to be replaced by Tom Baker. 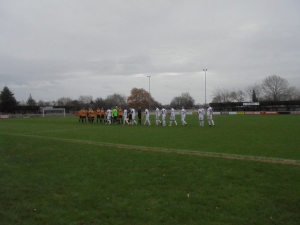 The game got underway with both teams looking to attack early. Paul and Dan both commented on how impressed they were early on with the visiting Unicorns from Yorkshire, and the side in gold proved their eye was right as Luke Porritt fired in after being awarded an age to pick his spot by some dire defending. After five minutes, we headed on round to behind the goal, where I’d been advised by Trafford’s former manager/founder Dave Law, that a group of lads from London were located, dressed in a mix of weird and wacky Christmas related outfits, including one covered in fairy lights. After hearing their story of how they go to a game twice a year, give presents at Christmas and support charities, they originally planned to head to Stockport vs FC, but eventually settled on this game.

We all felt around the sack and pulled out our gifts, a mug for Paul, a calculator for usual Dan, some “Tupperware” (a sandwich box) for me and a Toblerone for Dan. We were, understandably, delighted with our prizes, though Ossett ‘keeper Brett Souter probably wished he was having a quieter weekend, especially as I decided to sing  “pretty in pink” to hi and everyone joined in. Sorry, Brett, but that kit looked awfully good on you!

So, with very little happening on the field, I headed over to the food hut towards the end of the half and bought a chicken balti pie, peas and gravy for £2.30. Well worth the money it was too, as it was pretty good. Heading into the clubhouse at the break saw further Cockney-related shenanigans going on as I caught up with some more old faces during the 15 minutes or so. Soon enough, though, it was time to finish up the pie and head back out and into the bracing winds of Desmond for a second period that a very small percentage of those in the ground would have been looking forward to.

As usually happens in such conditions, chances continued to be at a premium with Ossett continuing to have the better of the play, though without really looking like adding to their lead. Added to that, nor did Trafford ever look like equalising especially when bringing on a sub after about 70 minutes, who proceeded to do nothing apart from lose the ball over and over again. Luckily for us, we had been somewhat accepted by the cockney crew and they continued their friendly barrage of shouts towards various players, none more so than poor Brett, who was given a free Smurfs DVD for his Xmas gift. 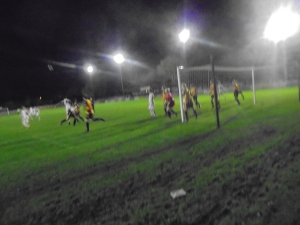 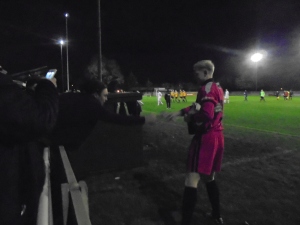 Come the full-time whistle, the ‘keeper was clearly in celebratory mood as he retrieved his DVD and pulled a cracker over the perimeter boards. No, this is not a view on a person, but a Christmas Cracker. He did, however, refuse to read he joke, claiming there was nothing in it. Booooo.

So, after a squad photo, we bid goodbye to the London lot (not before one exclaimed “Wait!”. He fixed his beard before continuing “I’m not supposed to be here!”) and headed out of Shawe View and traipsed back to Urmston, but not before Paul and Dan exclaimed their dislike at the Conservative Club on the way! On arrival back in Urmston, the Liverpool pairing headed on their way home and Dan and I headed into Chadwick’s to watch Chelsea vs Bournemouth.

After an underwhelming first half, Dan said his mother wa in ‘Spoon’s so should we go there. The offer of probably free beer was te main selling point, so back to the Tim Bobbin it was for a short period before Cappy met up with us again and we finished of the Urmstonian pub crawl with a visit to the HopHouse (in an old funeral home) and the Lord Nelson, the traditional old boozer. Dan left us shortly after we arrived here toget his bus back home, and Cappy and I finished off with a short trip into Manchester and their endeth our story.

Cappy showing his colours in the Hop House!

A good trip out and one just down the road. It just goes to show that you don’t always need to travel far to meet some great people, they’ll travel to your end sometimes! As for me, next week it’s back onto the FA Trophy trail once again. As for Trafford, it was good to finally got back after a long period away from the place. Old habits, as they say, do die hard…

Ground: 6- Nice enough, but not much to it now the mounds are out of action.

Fans: 5- Rather subdued, not much atmosphere at all, but I guess it’s understandable.

Food: 8- Well worth the price, as I said earlier.

Value For Money: 7- Poor game, but a great day otherwise.

This site uses Akismet to reduce spam. Learn how your comment data is processed.